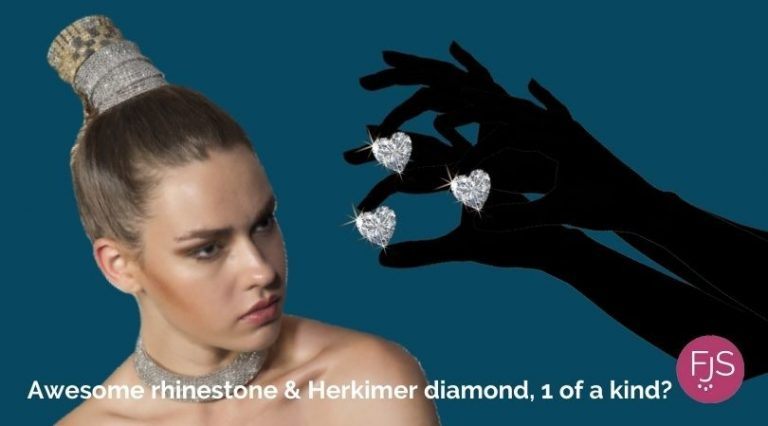 Rhinestone & Herkimer diamond, 1 of a kind?

Does the title confuse you? Well, the answer will too! Read this blog and find out all about it.

Rhinestone and Herkimer diamond is called ‘the poor man’s diamond’. There are less expensive, but the brilliance and appearance look like a real diamond. Very rich people, that owe very expensive jewelry made of diamonds, leave those precious pieces in the safe and wear replicas made of rhinestone quartz or Herkimer diamond.

And to make it even more complicated… Herkimer diamond is actually a very high-quality rhinestone quartz, found in the Herkimer mines, and called ‘diamond’ because of its features. The funny thing is that also the rhinestone quartz has a replica: the Swarovski beads or the Czech glass beads.

But let me explain to you what are the differences and what is what? I tell you first all about the rhinestone quartz and then about the Herkimer diamond. Use the Table of Content if you want to scroll faster.

Rhinestone is pure quartz. It has no color, is transparent, and has a glance like glass. This quartz is commonly found, but the best qualities you find in Madagascar, Brasil, and Arkansas (USA). And mankind knows this quartz already in the Mesolithic. In the Roman Times, people import this ‘stoned ice’ from the Alps (Switzerland) and in Greece. This material is called ‘Krystallos’, which also means ‘stoned ice’ because the Greeks at that time think the gods make this gemstone with ice. It stays cold (in temperature), also when it is sunny and warm.

In the Middle Ages, people make cups and jewelry of rhinestone. They believe that it detects poison and when the rhinestone touches that poison it breaks or changes color.

You find a lot of this quartz in nature, but the quality is mostly not good enough to cut the quartz into gemstones. Good quality is found in Switzerland and Austria, in the Alps. Near the St Gotthard, they find this quartz of 135 kilo / 298 pounds and near the Grossglockner, you find nearly 1000 kilo / 2205 pounds of quartz.

In the Smithsonian Institute in Washington, you see a faceted rhinestone of 7000 karats, that weighs 48,5 kilo / 107 pounds and has a diameter of 33 cm / 13 inches. This quartz is found in Myanmar and cut/polished in China. In the 80s of the last century the Casino owner of the Golden Nugget in Las Vegas (USA), Mr. Steve Wynn, buys the largest rhinestone in the world for $1 million. This faceted rhinestone weighs more than 27 kilos / 61 pounds and is called ‘the Hand of Faith’. It comes from Austria.

What is this quartz anyway?

There is a bit of confusion. What exactly is this stone? And is the meaning of the word ‘rhinestone’ everywhere in the world the same? Starting with my own language (Dutch): in the Netherlands, we call this gemstone ‘bergkristal’ (translated: ‘mountain quartz’) when the gem is made of pure quartz, transparent; a real gemstone.

The name rhinestone comes from the rock crystals/quartz that you find in the river the Rijn (or The Rhine). This quartz comes from the Alps and the little stones are taken by the melting snow to the river.

But nowadays with ‘rhinestone’ people talk about ‘leaded glass’ or ‘crystal glass’. That is not a gemstone, it is handmade. A jeweler Georg Friedrich Strass uses this crystal glass in the 18th century to imitate diamonds. He coats the lower side of the crystal or leaded glass with a metal powder for brilliance. This material is called ‘strass’. With this invention, the glass becomes more brilliant and more reflective. The strass is very popular in Europe and often the Europeans refer to strass when they talk about rhinestone.

At the beginning of the 13th century, people call the rhinestones Czechoslovakian and Bohemian glass rhinestones. Made by pulverizing glass and adding different metals to get the colors to get an opaque glass stone. Pure glass does not reflect light and you do not get the scintillating colors. Therefore they add lead to the glass so that it forms the crystal. Crystal is heavier than glass but has brilliance, reflection, and great colors. Now you have crystal rhinestone and glass rhinestone.

This is not the end of the confusion. There are craftsmen who make that metal layer as thin as possible, by using thin foil on the lower side of that leaded or crystal glass. The new material comes out of that process. In 1894 Tiffany discovers ‘favrile glass’ and in 1955 Swarovski comes up with ‘aurora borealis’ glass. The Swarovski beads have many colors and come in four major qualities: crystal-clear, AB, transparent, and effect). They are always faceted and they intend to look like diamonds.

The big step forward is the invention of the glass cutting machine by Daniel Swarovski. With this machine, he cuts faceted glass that has a very high quality. He even makes Swarovski beads in mass production, which makes them available for people without a big wallet. The beads have more than 30% lead in them and the slopes of the facets are more than perfect with every bead. Swarovski gives Liberace in 1982 a nice present: a 115.000 karat rhinestone with a weight of 23 kilo / 51 pound

Eisenberg & Sons, the imitation king of the diamond.

This company is very famous for its high-quality costume jewelry in the 30s and 40s of the last century. Originally it is a clothing company and they make jewelry to decorate the clothing. That jewelry is so popular that it is kept getting stolen. Eisenberg copies 18th-century jewelry so well, that only a few people see the difference. He uses the same technique of making jewelry as in the 18th century.

To summarize it for you:

Let us talk about the Herkimer diamond, a kind of rhinestone quartz, but of a much higher quality.

In my collection, you find (when it is not sold already) an absolutely gorgeous necklace. Really one of a kind made with beads that look like diamonds. Beads that are as clear and lustrous as diamonds. They feel like diamonds, but it is quartz. People call the bead a Herkimer diamond. Extraordinary quartz, but quartz. But why do people call this beautiful quartz a Herkimer diamond?

What are Herkimer diamonds exactly?

Herkimer diamonds are double-terminated quartz crystals, formed in the dolomite formation of Herkimer County near New York and Niagara Falls.

They have 18 facets (diamonds have 52 facets). That means 6 facets around the center and 6 facets on each point. This quartz is very clear and the facets are naturally formed. Sometimes they have inclusions of water or gas or even petroleum.

They are formed about 500 million years ago. In a shallow sea full of sediments from the Adirondack Mountains. There are little caves or vugs formed in the rock by acid water. And the crystals grow very slowly in the caves because organic sediments covered the rock and the temperature of that rock rose very very slowly. This process resulted in quartz that is exceptionally clear.

Why are they called ‘diamonds’?

The Mohawk people and early settlers in the surroundings find these quartzes in their fields and in the river. They are so clear and beautiful that they call them diamonds. The people use them as amulets or make tools of them and exchange them with other Indian tribes.

In the early 1600s European beads come on the market, made of glass. And the popularity of the Herkimer diamonds becomes less and less.

But in the late 18th century workmen cutting dolomite in the Mohawk River ‘rediscover’ the Herkimer quartz and start mining this beautiful gem. They call this quartz the Herkimer Diamond, due to its clearness and its naturally formed facets, which makes the quartz look like a diamond.

Besides this, … double-terminated quartz is very rare!

A Herkimer diamond or a ‘real’ diamond?

When you are lucky you find the right geode (that is a piece of more or less round rock with an empty space in it). When you hit your hammer hard the rock breaks and the crystals are there for you.

Herkimer diamonds give a lot of energy

I you believe in the power of crystals and gemstones in general, you have to look for a Herkimer diamond. They are called the high-energy seekers of this world. Since most of these Herkimer diamonds are very clear and transparent they manifest a pure and solid light and amplify the spiritual energy. They can be used in meditations, dreams, and spiritual explanations.

This gemstone is harder (7.5 on MOh’s scale) than other crystals and they are double terminated. So they can transmit their own energy, but also receive energy and amplify that. Due to the hardness, the Herkimer diamond gives you the strength to handle challenges.

Is ‘Herkimer diamond’ the right name?

People know this gem as ‘Herkimer Diamond, already for ages. But it is a ‘misnomer’. In 2015 the US Federal Trade Commission decides that the improper use of the name of a gem is a felony against the seller.

But until now they call the gem ‘the Herkimer diamond’. And it is as beautiful as a diamond is, although it is quartz.

If you love gemstones and gemstone jewelry you will love this PDF full of stories and information about the birthstones. Great to see what your birthstone is, but also perfect when you want a personal gift for your friend. Ask for this PDF. It’s free! Just let me know where I can send your copy to.