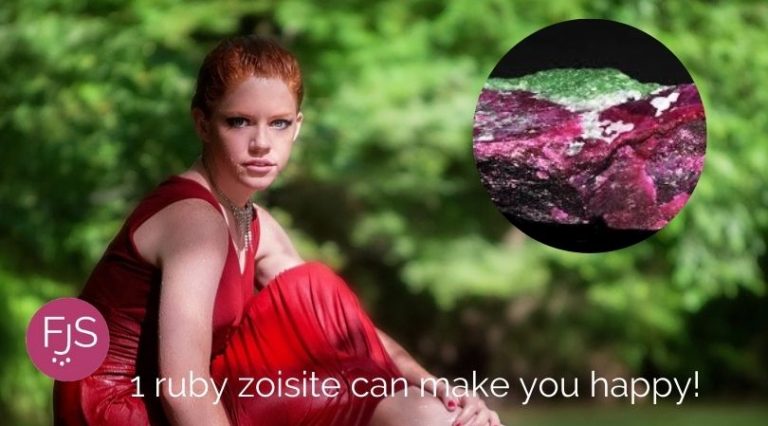 Nowadays you can do with some relaxation, with feeling vital, with a little abundance and prosperity and with positive feelings. This gemstone can make these things come true, but do you know that ruby zoisite makes you happy too?

All these great features are linked with this gorgeous gemstone. There is no guarantee that you get all this when you wear a piece of jewelry with ruby zoisite, but the gemstone is beautiful so why don’t you give it a try?

What is this gemstone exactly?

This green, red, and black gemstone is a natural combination of the red ruby, with the green zoisite and some black hornblende. And this all in one stone. The largest mines are in Tanzania (Longido mines) where it is discovered in 1949 by Tom Blevins. He thinks he finds ruby… oops, mistake, it is a green zoisite matrix with large inclusions of mostly opaque ruby and black hornblende minerals.

Every stone is different in color, pattern, and hardness, depending on the amount of each ingredient in the gem. The zoisite gives the green earthy color. Add a bit or more pink to red ruby to it, and you get your pattern and the highlights. The pattern is framed by the black hornblende.

Later the gemstone they find in Zambia and India. Sometimes it is called anyolite, which means ‘green’ in the Masai language. There are also other names to call this gemstone, like ‘ruby-in-zoisite’ or ‘Tanganyika artstone’. This gem can be confused with a stone, called chloromelanite (also called jade-albite or Maw-sit-sit jade from Myanmar). Only ruby-zoisite has more red and pink colors.

The ruby in the ruby-zoisite does not have excellent quality, as we are used to the high-quality ruby. But the red ruby is still favorite with the cutters, who try to make a cabochon or bead with as much ruby material in it as possible. And they try to leave the black color out. This gem is great to make cabochon and ornamental objects from.

But cutters very well know that it is not the amount of red or ruby in this gem that makes this stone interesting and valuable, it is the unique pattern of the red color with the green base that makes this gem stunning. Of course, the buyer decides whether that special pattern in a certain stone appeals to her or him, or not.

Another thing that makes a gemstone valuable or not is the presence of the black hornblende in a particular zoisite stone. Those black veins are not popular and too much black makes the gem cheaper. You better look for gems that have quite a lot of red on an interesting base of green zoisite, with vivid colors and a smooth luster,

Since large pieces of this gem are rather affordable is this gem popular as an ornamental stone, to make statues or decorative objects from. Normally this stone is not faceted, most of the gem is tumbled (free-shape smooth) or drilled to make beads.

It is not known that this gem is enhanced, dyed, or otherwise treated, to make it look better. Or to make it look like another gemstone, that normally is more expensive. But this gem can be nixed up with another one.

And that is a gem called chloromelanite, a jade-albite, or a Maw-Sit-Sit jade from Myanmar (Burma). Both gems are about equal in price, so when you make a mistake it is not a disaster, as for the price. Maw-Sit-Sit jade has a different green color and it has dark green and black veining inclusions, whereas ruby-zoisite has red and pinkish inclusions.

Ruby zoisite is typically cut into beads and cabochons as is the case for most opaque gemstones. However, when faceted, it gains extra depth and texture, which adds to the beauty of the stone.

Aside from this, ruby zoisite is an excellent material for small figurines, statuettes, and other ornamentation pieces as it’s relatively easy to cut, compared to some other gemstones.

The combination of two gemstones, with a different hardness, is unique in the mineral world. Actually, the green zoisite, which is rather soft – between 5.5-6.5 on Moh’s scale- are non-transparent ruby inclusions. And those ruby inclusions have a hardness of 9 on Moh’s scale. Therefore this gem is very hard to cut, due to the difference in hardness, and you have to use diamond cutting tools to do the job.

As said the zoisite is not as hard as ruby, which is 9 on the scale of Moh, but gem cutters make beautiful and sometimes large cabochons and decoration items of this gem. It has a great luster. And faceted beads are a bit rare, but stunning in necklaces and earrings.

The gem is opaque due to the inclusions (hornblende, ruby, and zoisite), but when it is polished it gets a great vitreous luster.

I love the combination of ruby zoisite with amethyst. It gives just that little extra. And it combines beautifully with malachite also. And one thing is sure: you recognize this gem immediately.

The name zoisite was used for the first time in 1805 by Baron Sigmund Zois von Edelstein. He was a scientist from Austria and had a huge mineral collection. He discovered that zoisite was very special and until that day a new mineral variety. Who better than this guy with a surname that means ‘gem’ in English, could discover this fact.

And of course, this new mineral was called after him: Zois…zoisite

In the 1960s a new type of zoisite was discovered, a blue variety, which was called Tanzanite (or blue zoisite) and was a dream come true for the gemstone market in Tanzania. Since that blue Tanzanite was only found in one mine in Tanzania.

What is the difference between Ruby Zoisite and Zoisite?

In ruby zoisite, you get the green zoisite mineral as the base and the red or pink ruby crystals or inclusions in the same stone. A great symbiosis of a precious gemstone and a semi-precious gem. In that symbiosis, the pattern is unique and differs in every stone. While other zoisite minerals have a more homogenous color pattern and all the gems look a bit after each other.

Most of the zoisite minerals are translucent or transparent and every variation in between. The ruby zoisite is opaque which is great for making cabochons and decorative objects. The other zoisites, like Tanzanite, are more suited to make precious jewelry, that is expensive.

Zoisite minerals occur in larger quantities, while ruby zoisite and for instance, Tanzanite only are mined in Tanzania, which makes them rare and therefore expensive.

What does the combination of ruby and zoisite for you?

To start with… all the alleged features of any gemstone are not (yet) scientifically proven. So don’t wear a gemstone as medicine, but go to a doctor if necessary.

The red ruby is the symbol of fire and the green zoisite of the earth. An ideal combination of regaining your balance and energy. For helping out when you have trouble finding the right balance between patience and mood swings. And it is the astrological gemstone for the sign of Aries and the sign of Aquarius.

Wearing a piece of jewelry with this gem cleans the mind from negativity, you get more passionate to reach your goals due to more motivation and confidence. And what attracts me most about this gemstone is that it forms the link between the heart and the brain. The heart and the brain start working together and not one of the two gets bossy.

With two colors in this gemstone, there is a kind of balance that gives you more relaxation, more happiness, and therefore more wealth (in a spiritual way). Say goodbye to depressions, to negative thoughts, and to high blood pressure.

This gemstone is used as the astrological gemstone for the zodiac signs of Aries (March 19 to April 21) and Aquarius (January 20 to February 18).

How to keep the ruby zoisite in great shape?

This gemstone is rather hard (6 to 7 on the scale of Moh), but even then, just try to avoid hard knocks. Therefore I don’t recommend using it in a ring. Due to the hardness of 6 to 7 don’t expose the gemstone to strong heat or sudden temperature changes.

Ruby Zoisite does not like acid or other cleaning fluids, including chemicals. You best clean the gem with a soft cloth or with water and soap. But be sure all the soap is gone after you store it in a soft cloth.

The best you can do is wear your ruby zoisite jewelry at social events, to work, etc. But not while sporting or cleaning.

I’ll bet that you have more pieces of jewelry, that need some extra care. Your precious jewelry stays beautiful when you store it properly and if it gets dirty, you clean it carefully. You can really ruin your jewelry if you make a mistake while cleaning it. If you are not sure you better ask jewelry to do it for you.

If you want to know more about how to clean and store your precious jewelry, ask for the free PDF. Just let me know where I can send it to.